We’ve all heard the term forgive and forget. Most leaders have said this. Most tweeters have tweeted this. Most religions believe this.

But up until recently, I was saying boldly and unapologetically ‘forgive but don’t forget’. Why would you forget what someone did to you, giving them the opportunity to do it to you again? To forget seemed naive to me. I didn’t realise that the way ‘forget’ was being used here wasn’t to say one ought to literally forget; somehow catch amnesia and remove the memory from your consciousness.

No, by ‘forget’ what they’re saying is: don’t keep record. Don’t keep reminding someone of what they did to you in the past. Don’t verbally criticise the person standing in front of you today based on the person they were yesterday. Because the thing is this: when you constantly remind someone of what they did, you don’t give them the chance to ever leave that person behind. Telling someone that they’ll never change is a curse. What do you think a person’s thought process sounds like when they hear ‘you’ll never change’ or ‘remember how you did this to me’? Do you think that motivates them to change? Do you think that allows for them to even believe change is possible?

Forgive and forget. That is: forgive and allow them to forget. Allow them to move on. Give them leeway to leave the old man behind and step into their new man.

What this doesn’t mean is that the memory of what happened should be completely wiped out from your mind. To do that would be purely unwise. Here is my revised statement regarding forgiveness.

Forgive and forget but don’t remain.

Negative thoughts towards a person poisons your mind. Anger is a prison cell for your brain. Bitterness is a hindrance to your emotional intelligence and awareness. And that’s just from a secular point of a view.

From a biblical point of view, negative thoughts towards a person is seen as evil and is a sin. Being quick to anger is a sin. Bitterness is a sin.

But how do you avoid it? When the person repeatedly hurts you, betrays you, and damages your soul, how do you continually forgive them? How can you forget enough to give them even that tiny chance to grow?

The bible says in Matthew 5:30

“And if your right hand causes you to sin, cut it off and cast it from you; for it is more profitable for you that one of your members perish, than for your whole body to be cast into hell.”

The Bible also tells us again in Timothy to “flee” from sin. So if you’re in a situation that is repeatedly causing you to sin, what do you do? Remove yourself from the situation. If it is a person that is causing you to sin, just like the example of the right hand, you cut that person off and cast them from you.

Similarly, for my non-religious readers, if it is a person causing you to poison your mind with negative thinking, remove yourself from their presence.

Forgiveness doesn’t mean your relationship with that person has to go back to the way it was before you were hurt. Forgiveness is simply letting go. And more often than not, it’s for your own benefit. One of my favourite Christian authors Lewis B Smedes said: 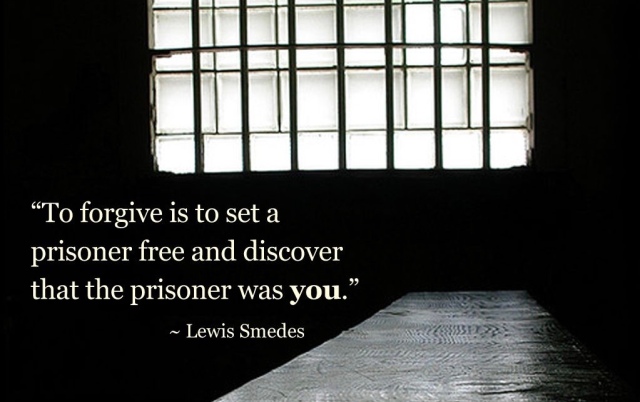 So tell me what would be the point of setting yourself free from the prison of unforgiveness just to walk straight into the prison of spiritual bondage?

You’re telling me someone has hurt you over and over again and can’t seem to stop yet you can’t release yourself from their grip… and you believe that isn’t spiritual bondage?

Some of us are spiritually bound to our churches. Some of us are church hurt and can’t heal from the wounds religion inflicted on us because we keep going back to that same church. Why? Because it’s bondage.

From someone who’s been church hurt over and over and over again, I can say from a sincere heart that the anger I’ve held towards certain churches has almost come in between me and my relationship with the One I love most in the world. Instead of separating myself from the specific church that hurt me, I separated myself from both the church and from God. And then when I came back to God, I returned to that same church. And I kept doing it. Leaving, returning, leaving, returning: a vicious cycle of spiritual bondage to a church that was wrong for me.

I’m letting go of all things, people, groups, organisations – everything and anything that causes me to harbour negativity. I vow to forgive everyone and everything that has ever hurt me, and I vow to allow everyone who was once harmful to me to forget about their past in order for them to be free from the chains of ‘I was once’. Most importantly, I promise myself that I will remove myself from the presence of anyone or anything who provokes spirits of anger or unforgiveness within me. I owe that to myself.

In fact, Wednesday just gone I attended a fellowship – one that I once loved. A fellowship that once had a place so deep in my heart that I considered it my home. But recently, the atmosphere there hadn’t been the same and there were many things about it that were irritating me. I soon realised that instead of entering and leaving that place with a loving heart, I was entering with an expectation of being excluded, overlooked and disappointed. I was leaving with a feeling of irritation and a yearning for transgressive rebellion. This fellowship made me want to war the body of Christ. And even though I was blessed with enough self control that I was able to calm myself down and pray for peace, I knew that it would be spiritually and emotionally dangerous for me to continue going there. So I said goodbye. And by the next day I was calling somewhere else ‘home’.

So next time someone tries to manipulate you into being by their side with ‘forgive and forget’ or the next time someone, out of their own misplaced anger and hurt, tells you to ‘forgive but never forget’, remember these three simple rules:

photo dump one time
Maybe we can take a cruise and listen to The Roots
I been drunk on myself for a while now ♡︎
Wait, what did you say?
How do you catch a cloud and pin it down?
Enjoy these for the next 24 hours at the request of @esthairx @babygirlblogger_ and @_abenax who beat me in the hardest bible quiz I’ve ever taken part in 🌚(they do get progressively worse as you swipe)
Loading Comments...
Comment
×
%d bloggers like this: